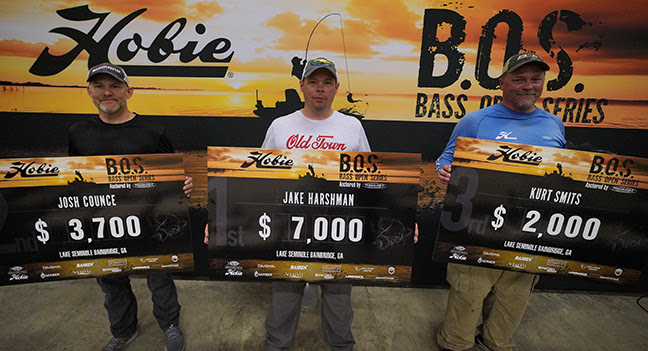 OCEANSIDE, Calif. (February 11, 2020) – Hobie Kayaks billed the inaugural tournament of its 2020 Hobie Bass Open Series – the Hobie BOS at Lake Seminole – as an opportunity to cash in on trophy bass and big bucks. The storied waters and over 125 participants didn’t disappoint. In a wild shootout that drew down to the last minutes of competition and witnessed the single-day total length record for an individual broken in the first hour of the tourney, anglers battled the elements, quarry, compadres and own psyches to turn in a remarkable performance that saw a total of 454 bass caught, measured, photographed and released.

“This tourney was absolutely crazy,” said Kevin Nakada, Fishing Team and Events Specialist for Hobie. “We had one competitor simply blow away the field on day one in near freezing conditions that had virtually wiped out any edge anglers might have figured out during their pre-tourney fishing. Then, day two saw incredible catches from start to finish with positions on the leader board changing every 15 minutes or so. In all, we had nine bigmouths top the 20-inch mark as several anglers on day two jumped more than 10 places in the standings.”

While many anglers struggled mightily on day one, Josh Counce, of Sopchoppy, FL, was on fire. Blasting out of the gate, he recorded an amazing 101 inches for his five-fish limit of catch-and-release bass within just the first hour of competition to break the all-time BOS single-day record. At day’s end, Counce was riding high in first place, a full 9 inches ahead of Jake Harshman from Harrisburg, PA.

“Even though it was cold out, I suspected some bass would be moving up onto their spawning flats, so I fished shallower than most people might in such chilly conditions,” revealed Counce. “When the water is muddy or discolored it can hold a little more heat than you might think. I focused my efforts around hydrilla and water hyacinth. That latter weed tends to hold a little more heat.”

Counce relied on a 3/8-ounce Z-man Jack Hammer Chatterbait tipped with a Z-Man Diesel trailer to rile up his fish. “I was slow-rolling it across the bottom, barely moving it,” he stated. “That first hour turned out to be really exciting, but I caught well all day long and it sure was a lot of fun.” 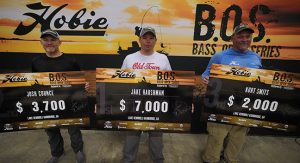 As a warm front moved in overnight, many competitors hoped the fishing would improve for day two, but no one could have expected the monstrous bite that would greet the sunrise as the temperature topped the 60-degree mark.

“It was absolutely incredible,” revealed Nakada. “Participants were changing places on the leader board all day long.”

Except for Counce, that is, who remained in the number one position from the start to almost the finish. With just minutes to go in the tourney, Harshman added one last bass to literally inch out Counce and the championship – 179.75” to 178.75”. Kurt Smits, from Ohio, closed fast, too. He climbed from 12th place on day one to finish third with 169.50” while using a Texas-rigged TRD and Texas-rigged craw to work a main-lake hump that had some rocks and grass around it.

“I had been fishing pretty far up the Flint river,” recalled Harshman, who enjoys river fishing on his home waters. “On day one I actually scored pretty well using a ½-ounce Z-Man Jack Hammer Chatterbait and hitting some deep pockets. The river was muddy, so I decided I needed something that would make a lot of noise and the Jack Hammer is ideal for that. I left the fish biting at my top spot on the first day, hoping to save a few for day two, but on the second day the river was blown out, muddy, high and fast. To make matters worse we had blue bird skies. So, I switched to a ¾-ounce Jack Hammer to fish a little deeper. Once I got down to 15 feet, I found the fish responsive to that bait when I gave it a twitch or small direction change, so I stayed with that pattern the rest of the way. I never really changed up my strategy, I just adjusted it to go deeper into the water column.” 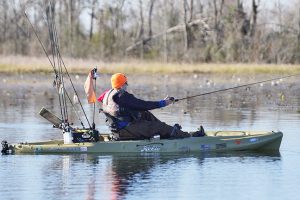 With 40 minutes to go, Harshman hit his biggest fish of the tourney, a 21.75” brute that finally gave him the lead. “Couldn’t have come at a better time,” he quipped. “It was really a challenge to overcome Josh,” added Harshman. “He really set the bar high right at the start. But I just stayed on my game plan, sticking with a pattern I knew well, and it all worked out.”

Counce fished well on day two, also; he just couldn’t match his day-one pace. “I caught fish all weekend long and only dropped one good bass that I hooked,” he said. “That’s pretty good for fishing in heavy weeds and around the stumps of Lake Seminole. I’m proud of my performance, and my hat’s off to Jake, too. He kept going and put together two tremendous days. I really enjoyed the tough competition – plus it was great to hang out with all the other competitors after the tourney ended.”

“It just goes to show how important it is to never give up,” Nakada summarized. “At the end of day one Counce had the kind of lead that’s hard to overcome at this level, but Harshman stayed with his game plan and just kept working to get the win. You’ve got to admire that kind of determination in the face of some pretty long odds.”

Not only did the Hobie BOS Lake Seminole tournament provide plenty of drama, it paid out some nice prize money as well, with Harshman taking home $7,000, Counce, $3,700 and Smitts, $2,000. Total payouts tallied $23,125 and covered up to 13th place. In addition to their cash prizes, the top three anglers also qualified for Hobie’s 50-angler end-of-year Tournament of Champions.

“The Hobie BOS really is a great tournament series,” noted Nakada. “It’s open to anyone with a kayak, offers great competition, surprisingly large cash prizes, a chance to test your skills against top level competition, plus opportunities to learn and network with others in the kayak fishing community.” 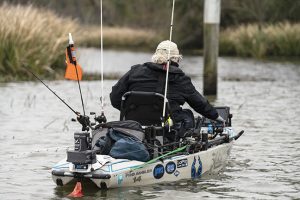 The next Hobie BOS event is scheduled for legendary Lake Fork in Wood County, Texas, February 22-23. Visit www.HobieBOS.com for the full schedule and registration details. 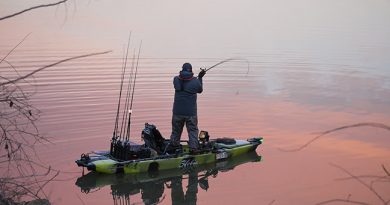 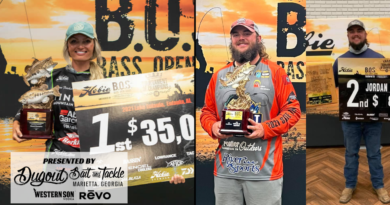 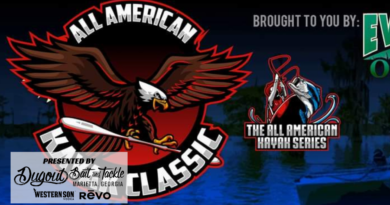