Might the B.O.S. All-Time Single-Day Record Be Broken Yet Again?

OCEANSIDE, Calif. (February 14, 2020) – Anticipation! That’s the buzzword among those planning to participate in the second installment of the 2020 Hobie Bass Open Series (B.O.S.), scheduled for February 22-23 on Lake Fork Reservoir, TX. Listen carefully and you can almost hear it dripping from the end of every sentence as the kayak faithful gather to discuss their plans of attack for the 27,264-acre impoundment, and the heavy-shouldered bass that call these waters home. 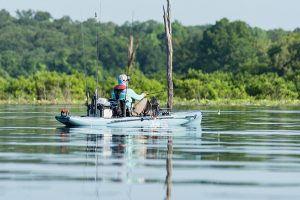 “We visited Lake Fork last year in June and it produced some really great fishing,” said Hobie BOS tournament director, A.J. McWhorter. “It’s a true trophy bass fishery with high-end potential and we’re hitting it at a great time of year for anglers to catch big limits and some potentially huge fish.”

Indeed, many consider Lake Fork to be the premiere trophy largemouth lake in the Lone Star State. It has three distinct tributaries (Lake Fork, Big Caney and Little Caney creeks), plenty of channel swings, abundant grass flats, hydrilla, Eurasian milfoil and water hyacinth, plus tons of stumps, standing timber, old roadbeds and foundations that were present before the lake was impounded back in 1980. With a maximum depth of 70’ and miles of shallow flats, coves, nooks and crannies to explore, the bassin’ possibilities are limitless. Numerous hawgs topping the 15-pound mark have been recorded here, including the Texas state record of 18.18 pounds. In fact, more than half of the fish listed on the Texas Parks & Wildlife Top 50 Largemouth Bass list have come from these waters, which offer over two-dozen public launch ramps plus several parklands to provide ample access.

“I absolutely love Lake Fork,” says Brian Howell, 27, of Rowlett, TX, who finished second in last year’s BOS on the big lake. “This is actually my favorite bass spot and it has amazing big fish potential. There’s so many 4- to 6-pound fish that the leader board can change several times in a matter of minutes if a few anglers get hot. Depending on the weather, it might take 100 inches of bass or more on both days to win this tourney. A cold front could tamper expectations, of course, but if we have fair weather leading into day one, watch out because it could be a slugfest.”

Last year’s Lake Fork BOS winner was Matt Ramey, 26, of Carlsbad, NM, with 194.25 total inches of bass caught, photographed and released. Like Howell, he’s ready to launch his ‘yak and get the competition underway.

“I like Lake Fork because it offers a super mix of structure and weeds, abundant fish and plenty of lunkers,” said Ramey. “I’ve pulled two personal best bass here in previous Hobie Tournament of Champions competitions, so the opportunity for a trophy definitely excites me. I also enjoy that it’s a completely different type of ecosystem from what I fish back home. I’m used to working hard, rocky bottom, clear, deep waters, and maybe a few mesquite trees if I’m lucky. Here, there’s tons of timber, extensive grass lines, creeks and coves. I can’t wait to get started.”

Both Howell and Ramey expect the Lake Fork event will pan out somewhat differently than last year since it’s being held earlier in the season. They agree that the bass are likely to be in a late winter or pre-spawn patterns for this tourney, calling for different approaches than they used last June.

“Last year I was throwing a 1.5 and 1-ounce Strike King punch jig on day one, working it mostly around water hyacinth,” revealed Ramey. “Day two was cloudy, cooler and brought some short bites so I switched to a 2-ounce Tungsten jig tipped with a Strike King Rodent to better punch through the matts. This year, with the fish probably in a pre-spawn pattern, I’ll be searching for clean water that’s a degree or two warmer than the surrounding area. I’ll push all the way back into the creeks and look for shell beds. They can be one of the first areas to hold bait in the spring. Mussels feed on algae and detritus, just like small baitfish, so I use them as a tip-off to possible productive feeding zones. Find some shellfish with a spawning flat nearby and you can be in pretty good shape this time of year.”

A member of the New Mexico Hobie Pro Team out of Zia Kayak Outfitters in Elephant Butte, NM, Ramey also notes that his Hobie 360 can provide an edge, especially on the grassy flats of Lake Fork. “With that 360 maneuverability I can get in and out of the weeds without ever dipping a paddle, even if there’s some wind,” he stated. “That makes it easier to work edges or even move in and out of thick matts without spooking my quarry. It really helps when the water is clean and the fish are shy, as is often the case in late winter and early spring.”

Howell plans to fish shallow so long as a cold front doesn’t squeeze through immediately before the tourney. “If I find the fish are in a pre-spawn pattern as expected, I’ll run at least half-way up some creeks to look for staging areas with a lot of timber,” he explained. “I’ll hit those areas with Chatterbaits, crankbaits and maybe some Texas-rigged soft plastics.”

Ramey and Howell are both big fans of the Hobie BOS format, noting that in addition to substantial cash prizes, there are plenty of giveaways for participants, a clear set for rules for all to follow, a highly competitive field and plenty of camaraderie to go with numerous events held across the country. That means anglers can compete hard and still have fun, meet up with friends, rub elbows with top competitors, and learn from some of the best kayak bass anglers in the country.

Not only did the Hobie BOS Lake Seminole tournament provide plenty of drama, it paid out some nice prize money as well, with Harshman taking home $7,000, Counce, $3,700 and Smitts, $2,000. Total payouts tallied $23,125 and covered up to 13th place. In addition to their cash prizes, the top three anglers also qualified for Hobie’s 50-angler end-of-year Tournament of Champions.

“The Hobie BOS really is a great tournament series,” noted Nakada. “It’s open to anyone with a kayak, offers great competition, surprisingly large cash prizes, a chance to test your skills against top level competition, plus opportunities to learn and network with others in the kayak fishing community.”

The next Hobie BOS event is scheduled for legendary Lake Fork in Wood County, Texas, February 22-23. Visit www.HobieBOS.com for the full schedule and registration details.

The 2020 Hobie Bass Open Series is open to anglers fishing in any brand of kayak and consists of nine individual tournaments. Cost for the two-day, weekend, open tournaments is $235, with a maximum of 200 boats per event. The top 10% of the field in each event receive cash payouts while the top three non-qualified anglers from each open qualify for the Hobie Tournament of Champions (T.O.C).

January’s opening 2020 Hobie BOS event, held on Lake Seminole, GA, witnessed Jake Harshman of Harrisburg, PA literally inch out Josh Counce, of Sopchoppy, FL, 179.75” to 178.75” after Counce broke the BOS single day record in the first hour of competition with an amazing 101 inches for his five-fish catch and release limit. Ironically, the record had belonged to Ramey.

Can the Lake Fork, TX Hobie BOS event match or even surpass those marks? An entire fleet of kayak bass fishing fans – especially Ramey – can’t wait to test the waters and find out. 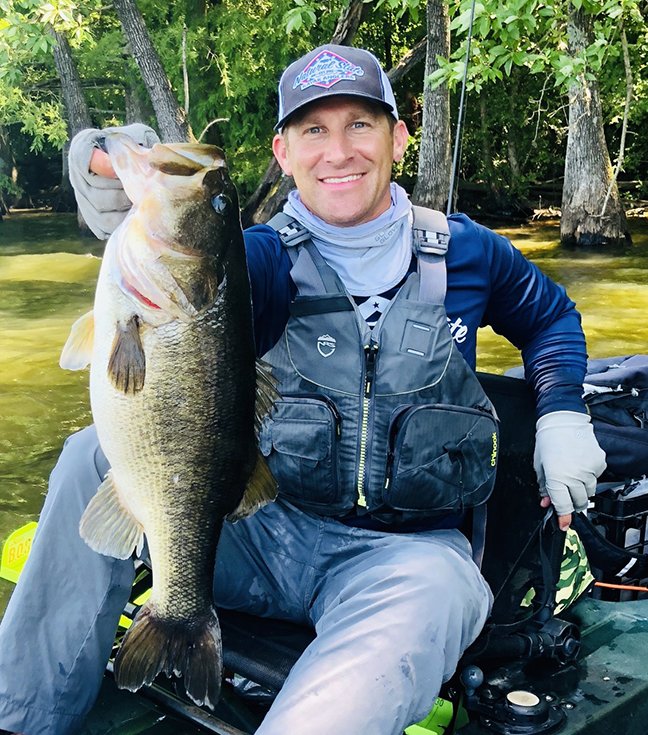 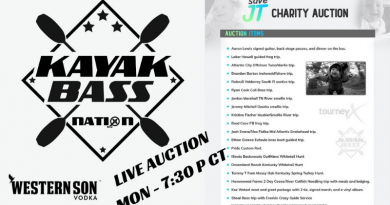 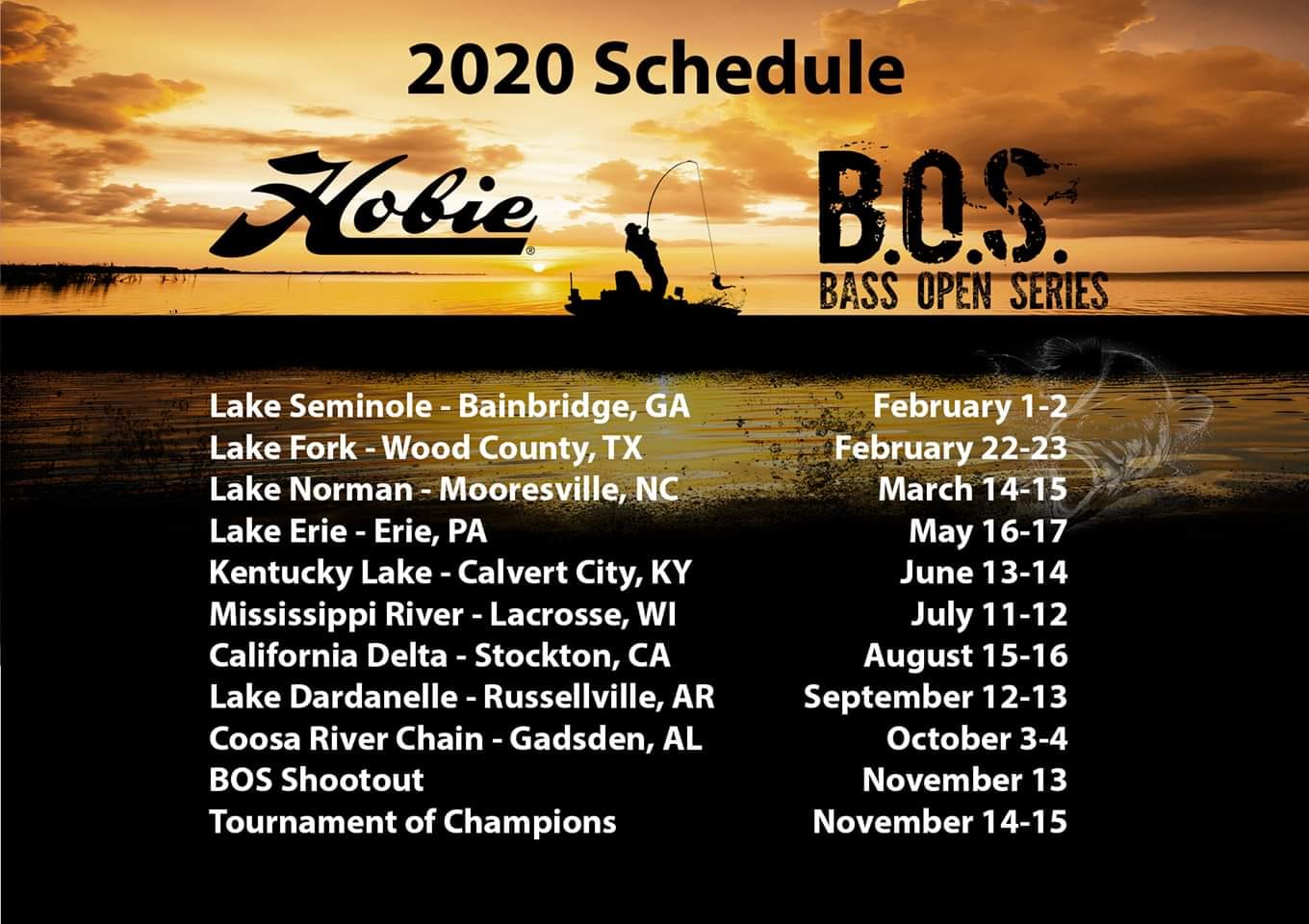