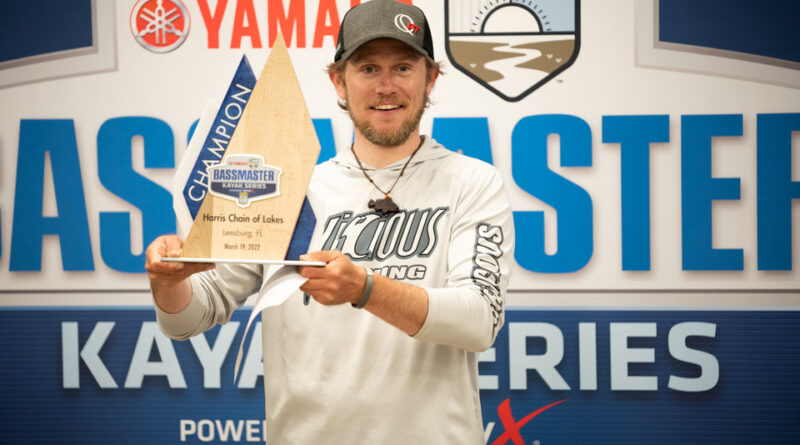 LEESBURG, Fla. — Plan B delivered in a big way for Justin Largen of Roanoke, Va., who tallied 93.25 inches to win the Yamaha Rightwaters Bassmaster Kayak Series at Harris Chain powered by TourneyX.

Launching his 12 1/2-foot Hobie Outback Mirage into Trout Lake — a smaller body on Lake Eustis’ northeast side — Largen split his time between a hydrilla bed in 3 to 5 feet and a residential seawall near a canal. Finding success in his secondary patterns made the win particularly sweet.

“This was very unexpected,” Largen said. “This was my backup plan. I had found big bed fish in practice, but they were all gone the day before the event. I heard a local went in there and (caught most of the bed fish).

“I was really excited when I found these fish, I was really dejected yesterday, but about halfway through today, I was back on Cloud 9 again.”

Largen said he started his day on a patch of hydrilla he located during practice after realizing his bed-fishing plan was gone. He caught his bass on a Strike King Hybrid Hunter crankbait.

“I was ripping it through the grass and they were crushing it,” Largen said.

While the grass yielded quality bites, Largen said a mid-morning adjustment helped seal his victory. As he explained, it was all about expanding his effort and recognizing a feeding scenario.

“There was a seawall a couple hundred yards past the grass and I found fish busting bait along that area,” Largen said. “I was seeing bait flickering and fish boiling, but it was hard to distinguish this from the waves breaking along the seawall. Once I got dialed in on what I was looking for, I started catching fish.”

Largen threw the Hybrid Hunter along the seawall, but he also made two afternoon upgrades with a 6 1/2-inch Missile Baits Quiver worm in junebug. He Texas-rigged the bait on a 2/0 hook with a 1/8-ounce weight.

Largen said that, while he recently bought several Hybrid hunters for his Potomac River home waters, he noticed Texas pro Ray Hansleman used this bait to earn a third-place finish at the SiteOne Bassmaster Elite at the Harris Chain of Lakes.

“I really hadn’t played around with that bait much until I was down here,” Largen said. “I saw he had done well with it, so I figured I’d see if I could make that thing work around the grass.

“I also knew everybody throws a ChatterBait now, so that would be a little different look with a similar vibration.”

Devoting his day to Lake Apopka, Brylinsky worked from a 14-foot Hobie Pro Angler 360 and spent his day around the lake’s dense hydrilla. Dialing in the sweet spot was the key to his success.

“I spent most of my time on a 1/2-mile stretch, but I caught all of my better fish in a 1000-yard area,” Brylinsky said. “This area had a good patch of reeds along the shoreline, with hydrilla out front.”

Brylinsky caught his bass on a 3/4-ounce Z-Man ChatterBait JackHammer with a Berkley The Deal trailer and a 1/2-ounce Gambler Heavy Cover swim jig with an XZone Mega Swammer. White colors worked best because the fish were feeding on shad.

“The big thing seemed to be getting the bait hung up in the weed and then pop it free,” Brylinsky said. “They were grabbing it on the pop.”

Fishing out of a 14-foot Hobie Pro Angler, Patrick stayed in Little Lake Harris and focused on cypress trees in 3 to 5 feet of water. He found his best success around trees standing behind a significant grass line.

“In practice, I got my better bites on a wacky-rigged 5-inch Strike King KVD Ocho in Okeechobee Craw color on a 1/0 VMC wacky hook,” Patrick said. “The Okeechobee craw was working better than any other color because of the water clarity. When I ran out, my bite slowed down.”

Patrick said his fish bit best in the first couple of hours before the rising sun diminished shadow pockets. His first fish was the 22.25 and he had a limit by 8:24 a.m. A noon cull finished his effort.

Thanking his travel friends, Mike Fink and Eric Siddiqi (winner of the 2022 Yamaha Rightwaters Bassmaster Kayak Series Championship powered by TourneyX on Richard B. Russell Lake), Patrick said: “I give all the honor and glory to God for my performance.”

Visit Lake, FL, the City of Leesburg and the Greater Orlando Sports Commission hosted the tournament. 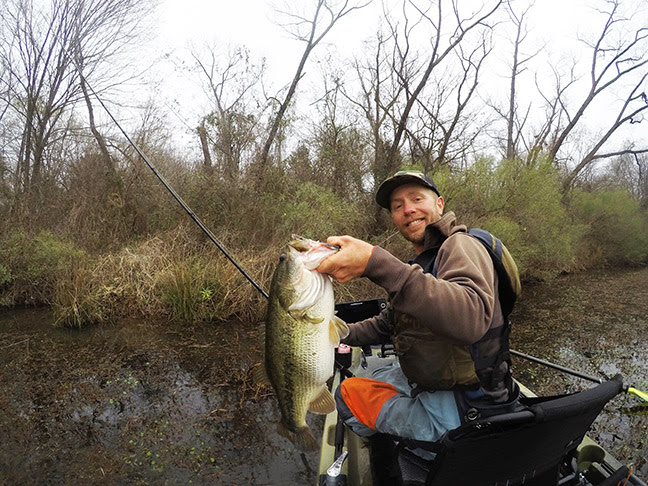 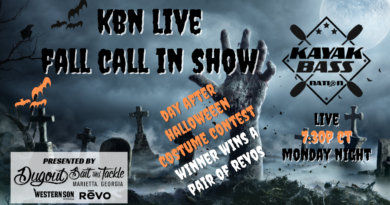