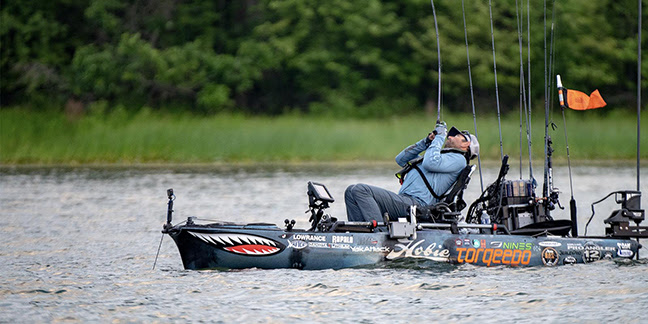 Elite fleet of kayak anglers looks to cash in on warming waters at one of the country’s most renown bass havens.

OCEANSIDE, Calif. (March 21, 2022) – The 2022 Hobie Bass Open Series (B.O.S.) Anchored by Power-Pole rolls into South Carolina for its second event of the season. Once again featuring a bucket list destination for kayak anglers, March 26–27 are the dates, and the famed Santee Cooper Lakes in Clarendon County is the place.

Known for both fast action and exceptionally big bass, there will be plenty on the line at this two-day, catch, photograph and release (C.P.R.) event. Cash payouts will go to the top 10% of the field, with the top three non-qualified competitors earning spots in the 2022 Tournament of Champions (T.O.C.) on Caddo Lake, Nov 11-13, in Shreveport- Bossier City, LA. Angler of the Year (A.O.Y.) points will also be distributed, and a $400 prize awaits the angler earning Bassin’ Big Bass honors. Additionally, all competitors have a chance to win a 2022 Hobie Outback in custom Orange and Black ‘BOS Camo’ color way, plus many prizes that will be randomly given away by event sponsors.

“To run a kayak tourney on such a famed chain of lakes at the perfect time of year is truly an exciting opportunity,” says tournament director A.J. McWhorter. “Our anglers are going to have a shot at some hefty limits and giant fish throughout the week and weekend, and they’ll have plenty of water to cover with the bass in both Lake Marion and Lake Moultrie fair game. The fish are probably shallow already, and they’ll likely keep moving up onto the flats at this point. I don’t know that we could be here at a better time of year for great numbers and potential personal bests.”

While the 200-angler field is completely sold out, competitors should be able to find plenty of elbow room if they poke around. After all, Lake Marion covers more than 110,000 surface acres and Moultrie spreads across 60,000 more. The two lakes are connected by the Diversion Canal and together sport more than 525 miles of shoreline to explore. Of the two basins, Moultrie tends to be the deeper with an average depth of 18 feet compared to Lake Marion’s 13-foot average. The latter also has plenty of shallow flats, a generous amount of which is tough for motorized boats to access making it a haven for kayak bass fans.

“You look at Santee Cooper on satellite images and there appears to be a lot of big open areas,” says Jay Wallen, 37, of Pikeville, Kentucky. “Get up close, though, and you’ll discover plenty of backwaters and small tributaries cut into the shoreline. It’s amazing how much water is against the banks and deep back in those pockets. You can really get lost in that stuff using a kayak to find places that don’t see much pressure. Scout around and you’ll spot cypress trees, lily pads and various kinds of grass. That’s a perfect kayak fishing environment.”

Wallen plans to use his Hobie Pro Angler 14 360 to push way back and find some big fish that haven’t been lipped in a while. “I’ve been fishing this lake since I’m 10 years old, and I think we’ll be hitting it at the perfect time,” he states. “Catching limits shouldn’t be a problem, but you’re going to need a couple really special fish to finish atop the leader board and claim the first-place prize of $10,500. Hobie did an excellent job of timing this event for maximum bassin’ impact.”

Wallen expects to toss soft plastics, chatterbaits and some topwater favorites around vegetation and cypress trees, but suspects the soft baits will ultimately rule the weekend. “I’m counting on my Hobie Pro Angler 14 360 to give me an edge here,” he reveals. “It’s a super stable platform that I can stand and cast from, especially when the fish are on their beds. Plus, the combination of that Mirage Drive and Kick-Up Fins will get me anywhere I need to go.”

Vinny Ferreri, 36, of Charlotte, North Carolina, agrees that it will likely take a couple of true hawgs to put the winner over the top. If the bass are already on their beds and anglers can see them, he believes, it’s going to come down to picking one or two really big fish. If anglers can’t spot them, having prior knowledge of which creeks they favor for spawning should be a big help.

“I’m fortunate to fish here a couple of times a year, but with 200 competitors, you can bet there will be some local sharpies that know what they are doing. That home field advantage can be tough to beat,” says Ferreri. “Still,” he continues, “there’s nothing you can’t catch bass on in these two lakes at this time of year, so fish to your strengths. There are lilies, wood, grass, current, water willow, cypress trees, open water and creeks here. Any way you like to fish, opportunities abound.”

For Hobie B.O.S. reigning A.O.Y., Jordan Marshall, 26, from Maryville, Tennessee, start time can’t arrive fast enough. He has his heart set on enjoying some warm weather and active fish. “I’ve only fished here once before, so I’m pretty much coming in blind,” he reveals. “But that means I can just fish the way I like, which will entail power fishing with Z-Man Chatterbaits in shallow water, covering a few topwater prospects, and targeting some staging pre-spawn fish. I’m also going to look for backwaters that haven’t been hit by recent tournaments; places where I can fish alone.”

To cut down on his searching, Marshall plans to focus on Lake Marion. Like Wallen, he’ll be counting on his Hobie Pro Angler 14 180 to probe far back into the shallow grass. “That Mirage drive is just fantastic when it comes to pushing through brush, stumps and slop,” he offers. “It sheds the grass better than any other drive I’ve seen – and the kick-up fins are a big plus, too.”

Wallen, Ferreri and Marshall each admit that the competition is likely to be tough at this event. “I think the Hobie B.O.S. is the premiere kayak fishing series in the country,” sums up Wallen. “Every time you enter one of these tournaments, you’re competing against 199 other expert anglers. To come away in the money, you’ll need to fish hard, fish big and fish clean. If you hook ‘em, you better get them in the boat.”

“I’m really excited for the BOS series to be drawing so strongly,” adds Marshall. “It shows that good things come if you take care of the participants. Hobie certainly does it right.”

Justin Marlowe, Fishing Advisor for Clarendon County, is thrilled to have the Hobie BOS series coming to town. “These anglers are in for a real treat,” he states. “The Santee Cooper Lakes were ranked #3 for bass fishing lakes in the country last year by Bassmaster Magazine. It definitely is a bucket list destination with big fish and plenty of them. Over the years these waters have held the record for the largest four-day Bassmaster limit at over 100 pounds – and the record South Carolina bigmouth, a 16.2-pound brute, was caught here, too. So come on down, push back into those swampy areas and enjoy the bass and beautiful scenery. Then kick back and do a little camping and relaxing. If you love the water and being outdoors, there’s no place better to spend a few days.” 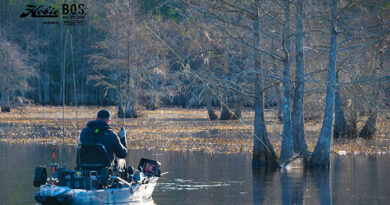 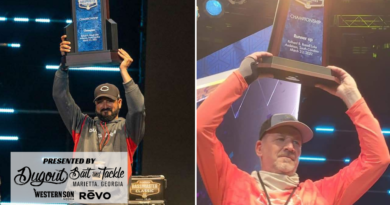 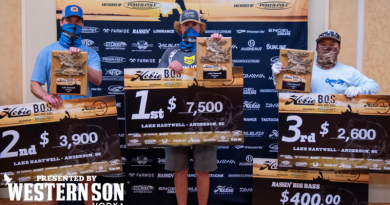